Analysis of Facebook’s Acquisition of WhatsApp The Irrational Rationale behind Facebook’s Acquisition of WhatsApp:

Defying all the theories of Corporate Finance and principles of equity valuation, Facebook recently announced the acquisition of WhatsApp at a whopping valuation of $ 16 bn…yeah…you heard it right…it’s billion and not million. Add to that shares of Facebook worth $ 3 bn to be issued as restrictive share units to the employees of WhatsApp, the valuation hits the rooftop of $ 19 bn. In terms of magnitude, let’s look at the table below to get a hang of the valuation quoted for WhatsApp.

“Facebook Buys Whatsapp” While we are still gasping for breath after going through the table above, let’s try to be rational and figure out what might have led Facebook price WhatsApp so high. 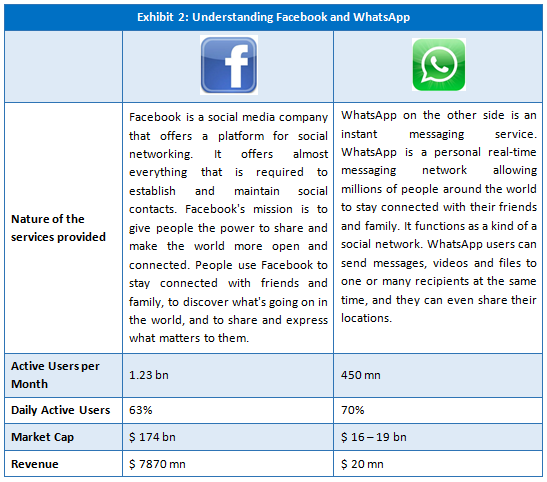 Even after spending some 10 hours and flipping through almost all the news articles, reports, and analysts’ opinions, I could not figure out any rationale behind such a high valuation. However, I could think of various reasons behind this acquisition. Before we get into the shoes of Facebook’s CEO and start thinking (rationally or irrationally) like him, let’s understand a little bit about the two companies involved here. None of them needs any introduction. And almost all of us would have used/continue to use platform offered by one or both of them.

While these are the statistics that place Facebook as a very strong buyer in comparison to the Target, let’s look at the facts below as well to figure out the reasons behind this acquisition:

The users on WhatsApp are highly active given the level of activity reported in the exhibit above. Facebook in comparison, is losing its shine – this is what I feel after interacting with the many around me.

WhatsApp has demonstrated extraordinary growth in its user base probably unparalleled in history.

WhatsApp user base is exactly what Facebook is looking for:

WhatsApp has a strong presence internationally and particularly in Europe, India and Latin America. These are also the regions where Facebook is trying to grow its base of users.

WhatsApp and other mobile messaging services are used by all age groups alike. They are widely used by teens and tweens, a group that has recently started dissociating itself from Facebook.

WhatsApp offers a very personalized one on one interaction platform which probably users of Facebook never got and always complained about.

The success factor behind WhatsApp is probably an early embracing of mobile technology. And this is probably the only factor behind Facebook’s struggle. They went public without any revenue from mobile devices. It is still looking to expand its mobile reach.

Although WhatsApp is more limited in its scope and capabilities to Facebook and Twitter, mobile messaging services are becoming competitors to traditional social networks.

Facebook is a relatively new entrant in the internet technology / social media business ecosystem. It needed support/platform to fight the existing and stable players in the ecosystem like Google, Apple, Microsoft, and Yahoo. Informal articles on the internet suggest that Google attempted acquisition of WhatsApp in the past, even attempted to outbid Facebook after the deal was announced and ultimately even suggested WhatsApp to stay independent as it had been always in the past.

Facebook may be attempting to emerge as a social media conglomerate. It can aspire to become a dominant player with different tools like Instagram and WhatsApp in its arsenal. Each one does things that the other property can’t.

Intriguing, isn’t it? If you wish to add anything further to the blog, go ahead and post your thoughts in the comments section below! Also, visit Dailybn.